Statement of the Initiative Group of the Open Orthodox Network 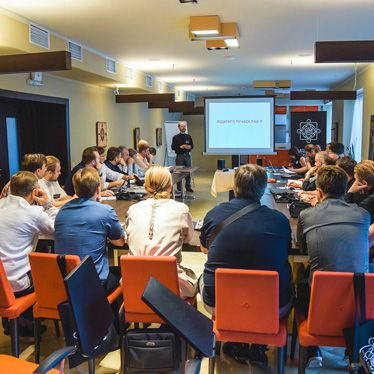 Statement of the Initiative Group of the Open Orthodox Network

Gathered together by the initiative of the Open Orthodox University of Saint Sophia-Wisdom, we, the clergy and faithful of the Ukrainian Orthodox Church, began a dialogue on the future of the Orthodox Church of Ukraine and its place in society.

The majority of us are determined and consistent supporters of the autocephaly of the Orthodox Church of Ukraine. We are open to dialogue and call upon Orthodox Ukrainians who belong or will belong to different Orthodox jurisdictions, to refrain from the language of hostility and violence to anyone in solving any issues, including matters of administration and property.

We propose peaceful coexistence, cooperation and concelebration instead of war between jurisdictions.

We welcome the desire of the Patriarch of Constantinople and the Ecumenical Orthodoxy to help Orthodox Ukrainians heal church divisions. However, we must not be passive observers, but active participants in the processes of reconciliation in the Ukrainian Orthodox Church.

The granting of a Tomos of Autocephaly of the Orthodox Church of Ukraine - this is just the beginning of the process of uniting Orthodox Ukrainians and the building of the Ukrainian Church on the basis of biblical wisdom, evangelical openness and Orthodox conciliarity.

The future of the Orthodox Church of Ukraine depends on us, Orthodox clergy and faithful.

In order to remove the imperial, totalitarian, and Soviet layers from our church and public life, we need not only a Tomos, but also an overarching conciliar process involving the best Orthodox theologians, who would return us to the true traditions of the Church of Kyiv and establish her future path.

We need not only the unity of Ukrainian Orthodoxy, but also the unity of the people of Ukraine. Therefore, we see our Orthodoxy as open to dialogue with society and the media, with science and education, with other religions and denominations, with faithful and the unchurched.

We support the efforts of the President of Ukraine and other Orthodox faithful who are elected by the people of Ukraine to superior government positions or are active members of civil society, to contribute to the process of obtaining a Tomos of autocephaly of the Orthodox Church of Ukraine. At the same time, we urge the state authorities to ensure the strict observance of Ukrainian legislation and to protect the constitutional right to freedom of thought and religion, thus preventing violence and ensuring a peaceful and legal solution to all contentious issues. We call upon politicians, experts, and journalists, to refrain from aggressive rhetoric, and to avoid inciting violence and threats, regardless of their personal opinions on the processes taking place in the Ukrainian Orthodox Church.

As faithful citizens of Ukraine, we are united in the pursuit of peace for our country and the restoration of its territorial integrity. We pray for the repose of those who died in defense of our independence, and all for the victims of the war. We pray for the healing the wounded, for the well-being of forced migrants and displaced persons, and for the release of the prisoners.

We believe in the possibility of unity in diversity, for we are united by the love of our Heavenly God and Father, our earthly mother of Ukraine, and sacrificial service to our neighbor.

Our One and Almighty God, protect our Ukraine!