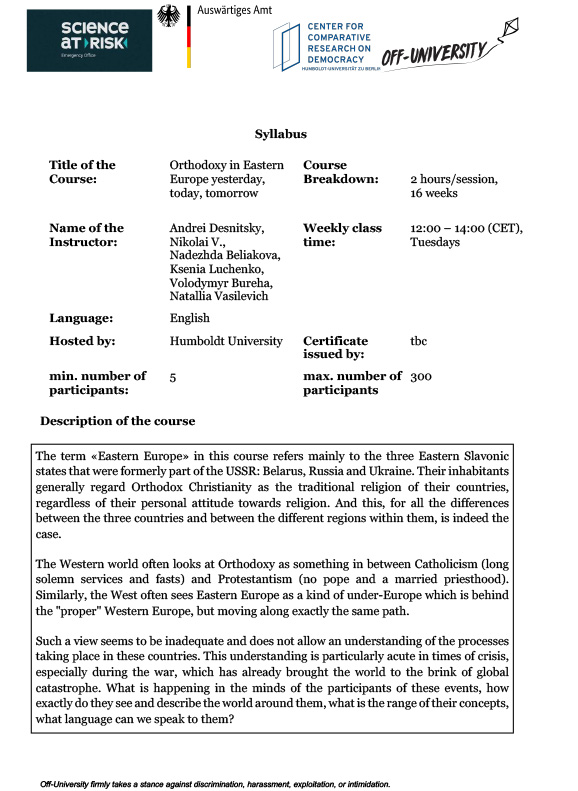 Registration is open during the course.

The term «Eastern Europe» in this course refers mainly to the three Eastern Slavonic states that were formerly part of the USSR: Belarus, Russia and Ukraine. Their inhabitants generally regard Orthodox Christianity as the traditional religion of their countries, regardless of their personal attitude towards religion. And this, for all the differences between the three countries and between the different regions within them, is indeed the case.

The Western world often looks at Orthodoxy as something in between Catholicism (long solemn services and fasts) and Protestantism (no pope and a married priesthood). Similarly, the West often sees Eastern Europe as a kind of under-Europe which is behind the "proper" Western Europe, but moving along exactly the same path.

Such a view seems to be inadequate and does not allow an understanding of the processes taking place in these countries. This understanding is particularly acute in times of crisis, especially during the war, which has already brought the world to the brink of global catastrophe. What is happening in the minds of the participants of these events, how exactly do they see and describe the world around them, what is the range of their concepts, what language can we speak to them?

The course is focused on the role of Orthodoxy in the public and political life of the three Eastern Slavic nations, which were part of the Russian Empire and the Soviet Union, and which became independent at the turn of the 1990s. Since the common name of the empire of the three nations was “Russia” and the Russian Federation still plays a key role in their political history, the focus will be mainly on Russia, but much will also be made of Ukrainian and Belorussian Orthodoxy. Our task is to show what is common and what is different in the cultures and histories of these three nations and compare them to the other nations of Europe, to which they undoubtedly belong (even if not all their rulers will agree with us on this)

Learning Aims
To provide general understanding about:
- History and role of the Orthodoxy in the public and political life of the three Eastern Slavic nations
- Key differences of Orthodox Christianity from Catholicism and Protestantism
- History and current situation of the Old Believers in Russia
- Current situation in Ukrainian, Belarusian, and Russian Orthodoxy in relation to the war in Ukraine