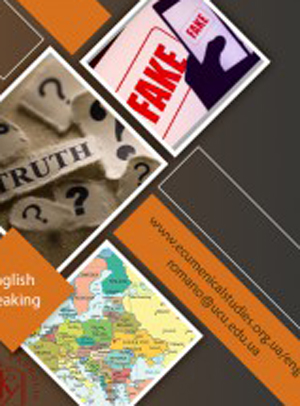 Truth-telling and reconciliation in the context of religious, national and geopolitical conflicts
Second Online Ecumenical School for Dialogue

English speaking online school for for those interested in theology, philosophy, humanities, politics, history and reconciliation.

Presented by the Institute of Ecumenical Studies at the Ukrainian Catholic University, ESD will last for 12 days and will consist of online lectures, discussions, seminars, video-presentations and virtual excursions.

Goal of the School:
To gather a team of international students and young researchers interested in theology, ecumenism, philosophy, humanities, politics, history and reconciliation around the topic of truth-telling and peace-searching, in order to provide them with the instruments which would be useful in analyzing and acting in the contexts of prolonged religious, national and geopolitical conflicts.

Tasks of the School:
1. To study key political, social and religious processes happening in Ukraine and around the region in order to understand better the roots and the consequences of the current Russian military aggression against Ukraine;

2. To study the notions of truth, post-truth and fake-news, and their practical application in the ecumenical, social and political discourses; To discover the ecumenical value of justice, truth and dialogue, and importance of their common witnessing today;

3. To explore the ways in which propaganda works by constructing myths and fake-news that causes mis-understandings, tensions and wars between the communities and the countries;

4. To search for creative proposals in order to deal with the phenomenon of hybrid wars and cultivate an at-mosphere with different levels of trust: between the Churches, societies and states;

5. To learn reconciliation and peacebuilding examples/projects in order to understand better the instruments which heal the memories;

6. To investigate the ecumenical situation in Ukraine, marked by the challenges of the inter-Orthodox unity, and its link to the creation of the Orthodox Church of Ukraine and the recent Russian military invasion;

7. To study cases of populism and responsibility and their historical, religious and political consequences;

8. To investigate the inter-denominational experience of the 2014 Maidan Revolution (The revolution of Dignity) and the 2022 Russian-Ukrainian war, its ecumenical search for justice and truth, and its impact on the broader society;

9. To learn the Ukrainian Churches’ experience and their struggle for truth during Soviet period;

10. To foster an understanding of Ukraine and its neighbors, in order to understand Europe better, by observ-ing insider perspectives.

The project is implemented with the support of the Mainz Diocese (Germany).