Persecution of the Catholic Church, Clergy and Laity in Belarus 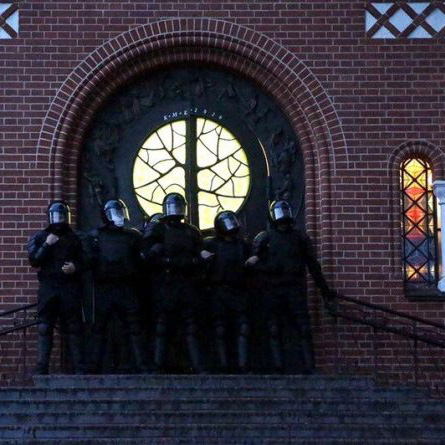 In the course of the political crisis in Belarus, the Catholic Church, its communities, clergy and faithful — both Roman Catholics and Greek Catholics — faced persecutions on account of their religious and civil activities: martyria — witnessing the truth of Christ’s teaching; diakonia — offering care to the persecuted; leitourgia — praying and worshipping.

Administrative persecutions, arrests, fines, searches
During the presidential elections campaign in Belarus, Catholics advocated for fair elections. Artiom Tkaczuk, a Roman Catholic activist, a member of the family movement, was one of those who launched a campaign “A Catholic does participate in stealing elections”. It aimed to remind Catholics that manipulating people’s votes, even if done under the authorities’ duress, is a grave sin. This campaign of moral rather than a political nature was supported by many parish priests in Belarus to encourage and empower the members of electoral committees to abstain from participation in rigging the elections.

During a protest rally in October 2020, Tkaczuk and his Evangelical Christian friend, Zmitser Dashkevich, raised a banner with the words “Let My People Go!”. The appeal referred to the Book of Exodus and the prophet Moses’ demand for the Pharaoh to release the chosen people from slavery. Tkaczuk is the father of two little daughters; he pleaded to be fined, however, the judge imprisoned him for twelve days.

There were also other Catholic activists arrested during peaceful protests. Marina Bulatovskaya, a Greek Catholic from Viciebsk, prayed the rosary with her friends in close proximity to a peaceful march. She was fined. Andrey Luhin and Aliona Palachanskaya of a Christian music band Laudans were arrested for 15 days. They were punished for playing a concert in front of several dozens of people in one of the Minsk neighbourhoods. Maksim Kavaleu was sentenced to 15 days of arrest for mourning — lighting a candle and praying at Plošča Pieramien (Square of Transformations) — for the allegedly murdered Roman Bondarenko. Alla Roshchynskaya, a Catholic from Viciebsk, was sentenced to ten days of arrest on a similar occasion. A 74-year-old Greek Catholic Barys Khamaida from Viciebsk was fined for holding a gonfalon with the embroidered text of the Our Father prayer. The gonfalon was made by another Christian, Antanina Pivanos. A 65-year-old Roman Catholic Maria Revutskaya was detained for one day after leaving the Cathedral of the Blessed Name of the Virgin Mary in Minsk where she had sung in the choir during a solemn Mass to celebrate Archbishop Tadeusz Kondrusiewicz’s 75th anniversary. On the way, in rain, Revutskaya held an open umbrella of white and red colours of the Polish flag and the word Polska (i.e. Poland). On the following day, she was fined: an anonymous witness insisted that Revutskaya had swung an umbrella in her hands. The KGB broke into and searched the apartment of Ruslan Tashtimirov, a Roman Catholic activist, the father of ten children and the founder of a Viber-based prayer group, The Scripture for Motherland. Flags, a computer and a phone were seized, and Tashtimirov was detained. He was interrogated, forced to sign a nondisclosure agreement and released.