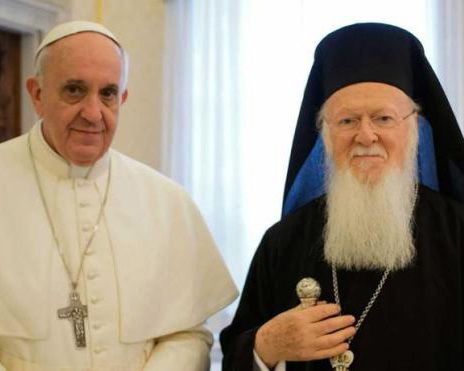 On Friday, Sept. 1, Ecumenical Patriarch Bartholomew and Pope Francis issued a “Joint Message on the World Day of Prayer for Creation.” Just over one page long, the pithy document packs an ethical imperative into its message about prayer for creation. This isn’t the first time that a pope and Patriarch have opined together on the environment: in 2002, John Paul II and Bartholomew penned a “Common Declaration” that drew on Orthodox theologies of Creation and Catholic Social Teaching to critique the environmental outcomes of “an economic and technological progress which does not recognize and take into account its limits”. In that document, the leaders called for “a growth of an ecological awareness,” and pressed the importance of the notion of stewardship, humility, and alignment with the natural (moral) law. Such ideas can be found in many teachings from both ecclesial bodies, but it is unquestionable that this new, September 1, 2017, exhortation emphasizes solidarity, service, and collective responsibility and action in important new ways.

What does the document say? The first paragraph begins with Scripture; thereafter, climate change is the central concern, especially the negative impacts on “those who live in poverty in every corner of the globe.” Like Benedict XVI in Caritas in veritate (2009) and Francis in Laudato Si’ (2015), the implication is that super-developed nations and populations have a special form of responsibility in remediating and resolving problems that benefit the elite few at the expense of the many people suffering worldwide. The third paragraph is resonant with Catholic Social Teaching on the environment, in a nutshell: “Our obligation to use the earth’s goods responsibly implies the recognition of and respect for all people and all living creatures. The urgent call and challenge to care for creation are an invitation for all of humanity to work toward sustainable and integral development.”